Seeing either an alligator or a crocodile in person is indeed a hair-raising situation. These scaly reptiles have always been confusing and bewildering humans. Both have mouths full of dangerously enormous sharp teeth and the strength to drag their prey into the water in brief seconds. Read this to know key facts about Alligators vs Crocodile.

There are several differences between alligators and crocodiles; however, the two have some similarities. If you and your family/friends decide to go on a zoo journey and you’ve found yourself in a scenario where you can’t distinguish if the creature before your eyes is a crocodile or an alligator, this article will provide you with some pointers to identify the two.

But before we can go to the difference, let’s check out what they have in common.

Similarities Between Alligator and Crocodile.

Differences Between Alligator and Crocodile.

Alligator Vs Crocodile in Appearance

There is a range of differences between Alligators and Crocodiles, specifically in appearance. As soon as you recognize these differences, you’ll be able to identify the two effortlessly.

One striking distinction is found on the back legs of both alligators and crocodiles. Alligators have webbed feet for full-throttle swimming, whereas the crocodile has a jagged fringe of skin bordering the back legs and feet.

Here are more details about the two helping know the difference between alligators and crocodiles. 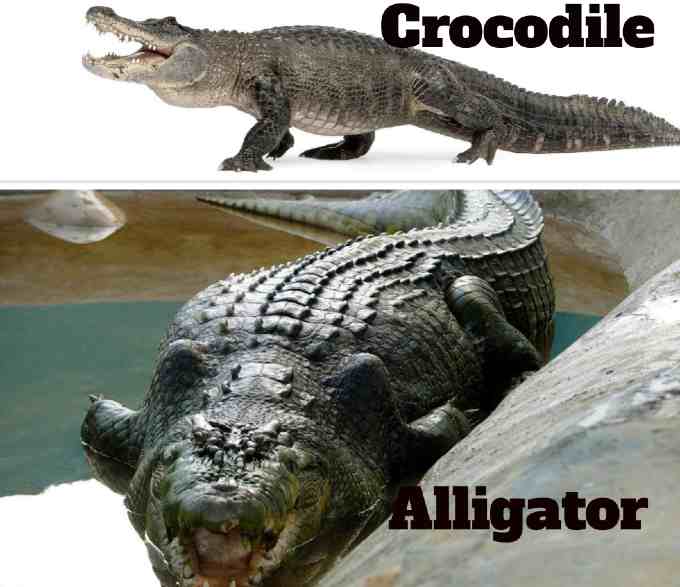 Crocodiles have long, v-shaped, pointed, snouts, whereas alligators have a wide, rounded, u-shaped snout.  Oddly enough, the difference in shape suggests that alligators can use more force from their mouths, which is convenient in breaking apart hard-shelled vertebrates, such as turtles. On the other hand, crocodile’s snout is more adapted to hunting common prey and allowing them to remove prey from tiny holes.

Maybe, another most straightforward way to distinguish an alligator from a crocodile is by observing their teeth. When their snouts are closed, the alligator’s lower teeth are virtually entirely hidden as the reptile’s upper jaw is broader than its lower jaw. However, in the case of crocodiles, they seem to be grinning with an upward turning smile. They have many visible teeth sticking up over their lips 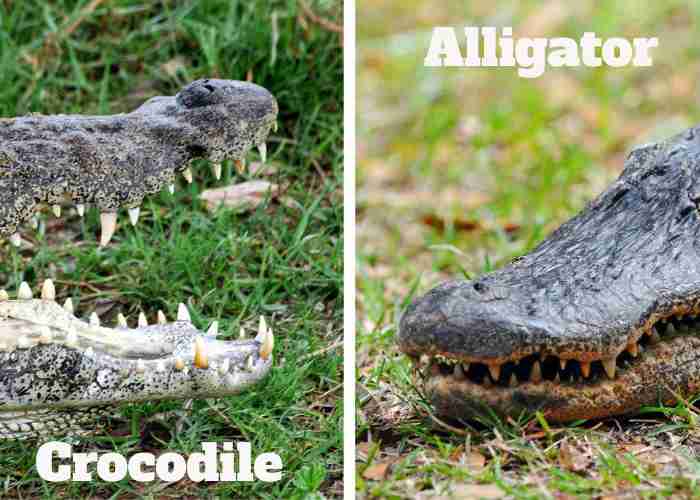 Everybody knows that alligators and crocodiles possess large, sharp teeth that are prominent from the side. But teeth in the lower jaw of an alligator are hidden when their mouth shuts because its lower jaw is narrower than the upper jaw, causing the upper to entirely overlap the lower.

The crocodile’s jaw is meant to capture and grasp prey, while its conical teeth easily puncture the flesh of its prey. The teeth in the upper and lower jaw meet well together when they shut their mouths. Their jaws can exert 5,000 pounds of pressure per square inch, indicating that they can pierce through an arm or a leg without much difficulty.

Color is yet among the easiest means to distinguish between alligators and crocodiles. Crocodiles are usually paler than alligators.

Crocodiles are likely to be light olive green or light brown. They generally have a speckled or mottled pattern and knobbly backs, helping them to law low in sheer water and camouflage during the muddy wet season.

Crocodiles’ rears and ends possess the color black, brown, green, or grey, while its undersides are white to yellowish. This dark and light pigment is called countershading, which is the basis of camouflage in predators. It enables them to integrate with the water while hunting. 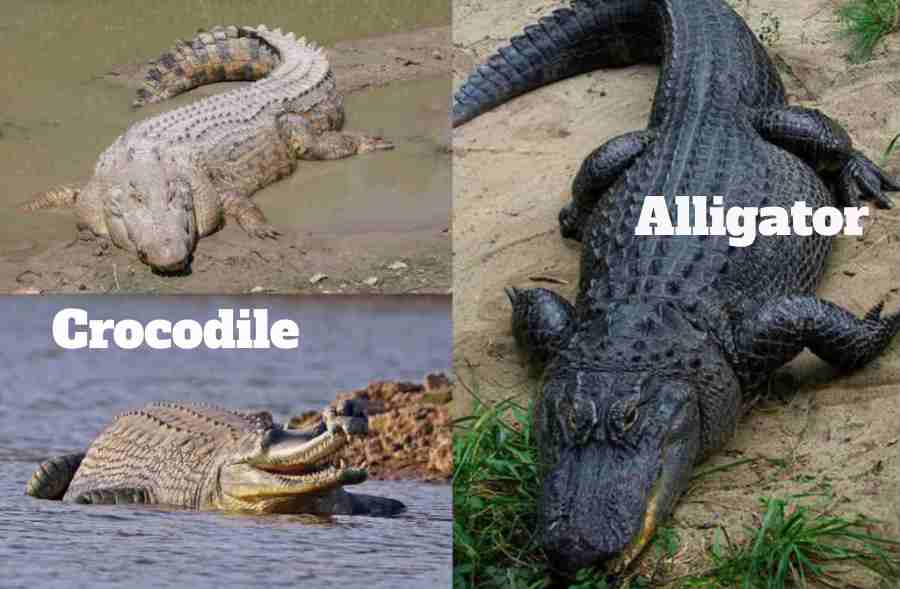 Alligators vary with habitat and can be almost black, gray, brown, or olive, with a lighter color underside. Algae-laden waters make them greener, while tannic acid from overhanging trees can create deeper skin.

Both alligators and crocodiles are giant reptiles, but the alligator is smaller. Generally, the alligator will grow between eight and 12 feet in length and can reach a weight of approximately 455 kilograms or 1,000 lbs. The most massive alligator ever documented anywhere was discovered in Louisiana back in the 1900s. This colossal creature measured a staggering 19 feet 2 inches and had an inaccurate 2,200 pounds of weight. 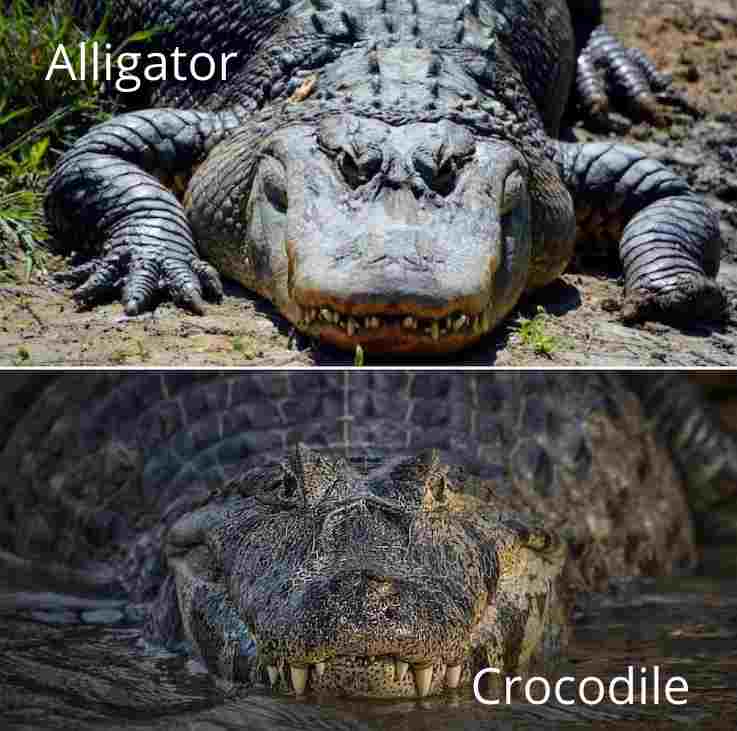 Crocodiles are the biggest and most massive of current reptiles, with an average size of 17 feet. And a saltwater crocodile from the Philippines, named Lolong, was the largest ever recorded in history. He has a length of 20 ft 3 inches and a weight of 2,370 lbs.

Alligator Vs Crocodile in Behavior

While crocodiles and alligators can be dangerous and kill you, alligators are less hostile than crocodiles, though they may display unusual behavior. When brushing alligator puddles, some caretakers can walk around these reptiles without evoking a reaction. Despite their horrific look, alligators have an innate tendency to evade and back off when a person gets near them. They usually only strike when they are triggered.

When you have a near encounter with this creature some meters away, retreat slowly. They might forget their fear and view you as food. They can likewise confuse little kids and small pets for prey. It is remarkably uncommon for alligators to chase humans.

Crocodiles, on the other hand, nearly always behave aggressively, even if they aren’t aggravated. Just one small, wrong move can result in life-threatening situations. Australian saltwater crocodiles are commonly deemed as the most dangerous on Earth. The saltwater crocodile emphasized its formidable reputation by being the only species to demonstrate frantic tail-wagging followed by pouncing head strikes on its enemies.

Crocodile attacks are prevalent in places where giant crocs are local, and human communities exist. Attacks happen on average 3.8 times every year. And it has been estimated that crocodiles per year butcher around 1,000 people.

Alligator Vs Crocodile in Habitat

Alligators and crocodiles are also likely to dwell in different habitats as crocs prefer to inhabit near wetlands, rivers, lakes, and saltwater environments. In contrast, alligators are likely to live in freshwater swamps, marshes, and lakes.

Crocodiles have strongly developed lingual salt glands in their tongues responsible for eliminating sodium ions from their bodies, thus enabling them to survive in saline waters. But alligators don’t possess such specialized salt glands, which causes them to be less accustomed to saltwater conditions and stick to freshwater habitats. 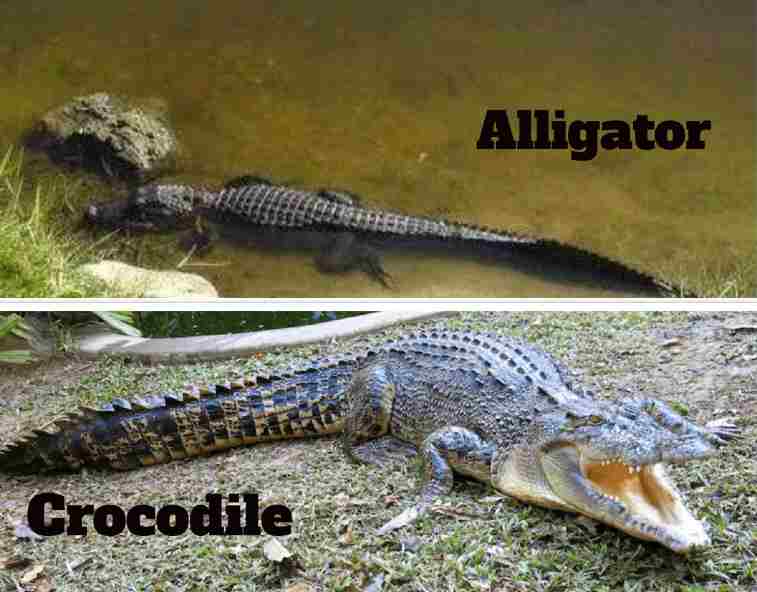 There are more crocodiles across the globe, though if you live in the US, there’s a higher chance that you will encounter an alligator. An estimated 5 million alligators are scattered around the southeastern United States. On the other hand, there are only more than 2,000 American crocodiles in Florida – wherever slow-flowing rivers and grasslands are prevalent.

Alligator Vs Crocodile in Speed

In Water: They’re both brisker and faster in water where they can utilize their long, powerful tails to move their bodies forward. While crocodiles can swim at 15 to 18 mph at brief spurts (about three times faster than the fastest human swimmer), alligators can reach a maximum speed of 20 mph and have much more stamina in the water.

On Land: These reptiles can both run, mainly when they feel they’re in danger, though only for a short period. The average crocodile runs at 7mph when around swamps and muddy banks, and they may exceed 10mph when they run on land, but in short distances. An alligator can run up to 11 mph on dry land, and they are known to exhaust immediately.

Who would win a fight between an alligator and a Crocodile?

Between two reptiles, the Crocodile would prevail in a head-to-head battle. While the alligator is more agile, crocodiles are generally larger and heavier. Crocs possess a more deadly bite because of their size and muscularity.

Which has the stronger bite; an alligator or a crocodile?

At the moment, the common belief is that the creature’s size is the determining factor, notwithstanding if it is a crocodile or an alligator. The larger the species will consequently have more powerful bites than the other; however, it depends on the comparative sizes of the actual reptiles being matched.

You can observe some species of alligators and crocodiles coexisting on the southern end of Florida, US. However, they do not settle in the same habitat, as already mentioned above.

Which are more dangerous to humans?

Generally, crocodiles are way more hostile than alligators, making crocs more dangerous than gators. Although Nile crocs are enormous crocodiles, Saltwater crocs are far more aggressive and have more stamina. No one can flee from them when they bite and do the ‘death roll.’

Adult crocodiles are notorious for preying on juvenile alligators and crocs as a way to maintain their numbers. But it’s unlikely that an adult crocodile would eat an adult alligator or other crocs bigger than them as this can trigger a fight and are extremely dangerous.

Can alligators and crocodiles reproduce?

No, they can’t. While they resemble each other, they are genetically very different. Even though they are in the same order, Crocodylia, they’re from different families. Alligators are from the Alligatordae family, while the Crocodile is a part of the Crocodylidae family.