Shelby Stanga is a globally known American television presenter and actor who is known for his appealing talent on live television while working in swamps.

He is also a television personality who gained massive popularity due to him applying his talent on shows like AX Men that aired on the History channel.

Moreover, he is also the legend who plays as the lead cast in his own show The Legend of Shelby the Swamp Man. Shelby is a man who earned his nickname as Swamp Man since he is always working around swamps and forests.

Talking about the swamp man’s early days, he was born on the 1st of January 1960 in Bedico, Los Angeles, to a Scottish-American heritage. He was raised by his single mother ever since Shelby was only 9 years of age.

Not much is known about the level of education Shelby has attained. Also, it is believed that Shelby had to quit his education due to the Ku Klux Klan’s activities near his house that made it unsafe for him and his mother.

Since his early days, Shelby has been training himself survival skills necessary to adapt to swamps and jungles ever since he was a child.

As a result, he has channeled his hobby of living in the wild into his career and is actively showcasing his career since 2009.

At 61 years of age, Shelby Stanga has accumulated a staggering net worth of roughly above $2 million. The majority of his income comes from his role in television reality shows.

According to some reports, it has been revealed that Shelby charged $70k per episode from The Legend of Shelby The Swamp Man.

Ever since childhood, Shelby wanted to make a career in the television industry. Moreover, he was equally supported by his mother as well.

Initially, Shelby Stanga began his career by hosting certain programs while he was a high schooler. He has also been seen appearing in some episodes of Man vs. Wild in 2006. It was at this time when his skills and ability were noted by the representatives of the History channel.

In doing so, Shelby was offered a role as a television presenter and tree logger in Ax Men, which is currently running its 10th season.

As arduous and challenging as his tasks were, but his involvement in the show propelled his career to new heights and took him to stardom.

In subsequent years, Shelby ran his own spin-off reality show called The Legend of Shelby The Swamp Man that aired in 2013. However, he quit the show as he claimed that he did not get paid enough.

After taking a brief hiatus from television media, Shelby returned with another one of his series called The Return of Shelby The Swamp Man in 2018.

There have been several rumors surrounding the death of the History channel’s Swamp Man from Ax Men while filming.

Especially due to the show’s nature of staging many accidents, injuries, and cliffhangers that would make people believe the stunts were real.

As it turns out, Shelby is still healthy and alive as of 2021 and has never been seriously injured. Many fans have accused the channel of false advertising just to attract fans.

However, there has been a number of real deaths while filming as well.

Shelby Stanga from Swamp People was Arrested for a Felony.

As much popularity as Shelby has received in his life due to his profession, the Ax Men’s Swamp Man has also had the misfortune of visiting the jail.

One of the reality show’s biggest stars, Shelby, was busted by the local police for logging the neighbor’s tree.

In 2011, he was alleged for cutting down a cypress tree that was standing in a swamp on his neighbor’s property in Bayou.

According to TMZ, Shelby was arrested by the Tangipahoa Parish Sheriff since a felony warrant was passed for his arrest. Surprisingly, he was released the same day he got arrested but faced felony theft charges.

Who is Shelby Stanga From “Swamp People” Married to?

Although being a celebrated television personality, Shelby has decided to keep his married life private.

However, according to numerous sources, it has come to the media’s attention that Shelby is married to his long-time girlfriend Donna Long, who happens to be Jehovah’s Witness.

The couple met each other back in the early 2000s before Shelby was cast for Ax Men. The duo married after dating each other a couple of times and are living a strong married life for almost two decades.

As for their children, the husband and wife do not share any children together. Moreover, they are never seen with children anywhere on the internet. 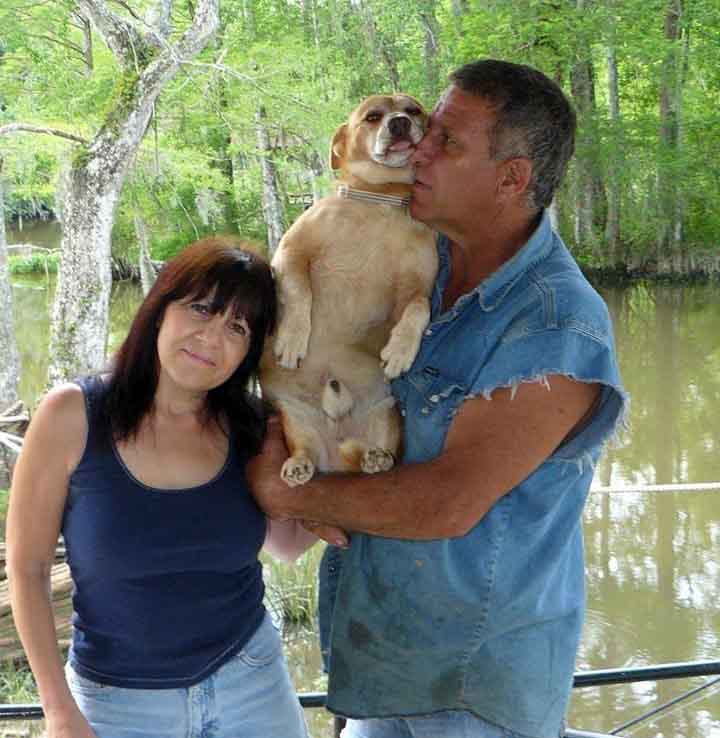 Shelby Stanga with his wife, Donna Stanga, and dog.

Where is Shelby Stanga now?

Currently, Shelby from Swamp People is residing in Lake Pontchartrain with his lovely wife Donna. The Stanga family is living a happy and serene life in their 3.5 acres of property with two pet dogs.

As of 2021, Shelby is running his latest reality show The Return of Shelby The Swamp Man which is in its second season. The 60-year-old does not look to retire anytime soon.

Shelby Stanga is a globally famous celebrity who has thousands of fans around the world. As much as his fans love him, he tries his best to send back the love to them by interacting with the fans and sending out giveaways.

However, he is only present on Facebook and cannot be found on other social media platforms.

With that being said, he has 172k followers on Facebook. There, he mostly posts pictures related to his work and keeps updating the fans with new episodes.